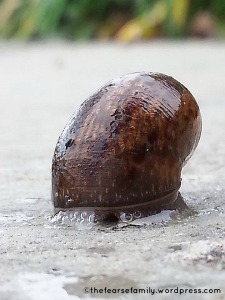 For the past two weeks I have taken part in a Joyfully Green online photography course. It has been such a lovely step outside my day-to-day life. I can even say that I love some of the photographs I’ve taken. The wonderful thing about the course was that I could do it using any camera at all. My own camera broke (and then broke some more when I attempted to fix it) a few weeks before the class started, so I was left with only my phone camera to use. I found that this was pretty good for taking nature photographs (though, of course, there are things I’d like to do but can’t really) and I even learned about some cool features on the camera just by playing around with it on a daily basis. 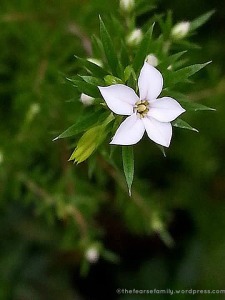 I love that now when I’m out and about in the wintery weater I’m looking for something unusual or beautiful to photograph, rather than bemoaning the grey skies and constant drizzle.I’m so grateful to Joy for giving me the confidence to explore photography in this way. 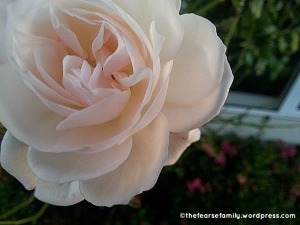 I look forward to sharing more of my artistic endeavours with you in the future. 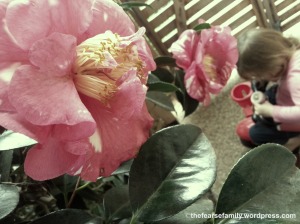 Kathleen Rea’s post on getting messy with the paints inspired our first ever Fearse Family painting session today. Little Fearse is only 15 months old, so we knew there was a good chance we’d be doing most of the painting and she’d do a fair bit of paint eating. 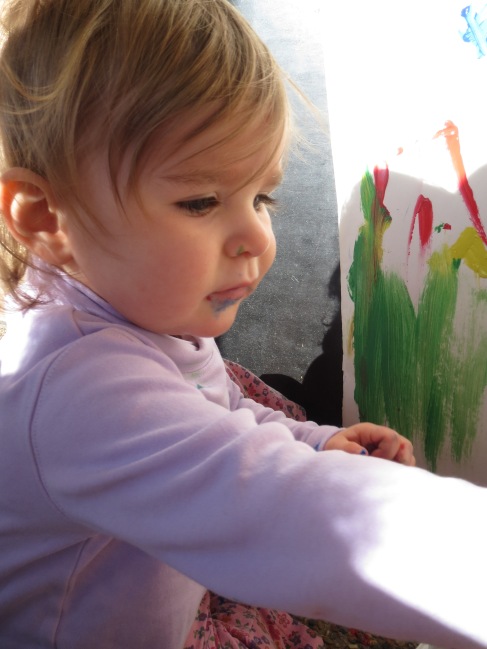 We were right, but it was more fun and easier than BP and I had thought it would be. Here is our first Fearse Family masterpiece. We hope to have many more in years to come (with much more input from Little Fearse herself!).

I went on a wild op shopping adventure through the ‘posher’ suburbs of Melbourne today, hosted by a friend who knows the area well. When I say “wild” I guess what I really mean is “whirlwind” because it didn’t end with us drinking tequila shots or buying ridiculous taffeta ball gowns. I think those days are over for me. At the end of the day we came home to our beautiful daughters, not a bad trade off.

I was pretty sensible today. I focused on stuff I needed (clothes for work and clothes for Little Fearse in size 2). I managed to find something from my list – a three photo frame – still in its packaging. I got Little Fearse a lovely stuffed Peter Rabbit for Easter. Apparently we are the kind of family who gives Easter gifts. I don’t think we were going to be that kind of family until toady when I went rabbit crazy at the op shop.

So, I was going along nicely buying things we needed or kind of needed or sort of needed and then I came across this… 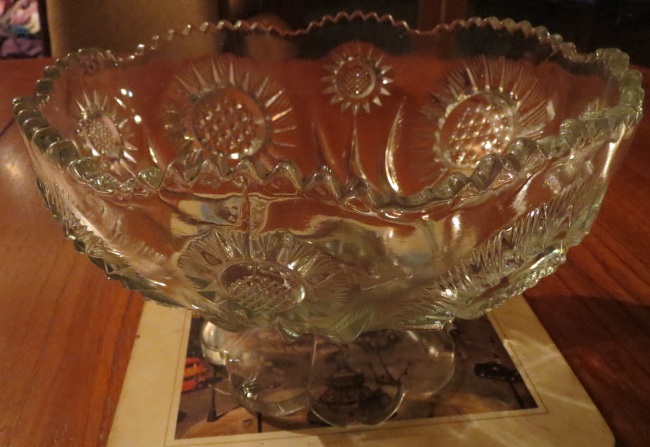 Now, I expect you to be underwhelmed by this fruit bowl. I’m clearly some kind of tin weasel peckerwood looney because when I showed this to my friend and to BP they both made the same ‘meeehrgh’ sound. I think it’s sensational. All glassy and flowery and ready for my fruit. And it sure beats the very blah modern green ceramic bowl I currently have. I dig this fruit bowl. I’m going to see this fruit bowl first thing in the morning and feel satisfied.

All glassy eyed with consumerist goo,

PS Yeah, I’m categorising this as art. What you going to do about it?

Prior to our family decision to buy nothing new in 2013, I have been working on a solo album that I plan on releasing in Autumn this year. This will involve a decent outlay of cash and also involve purchasing a large quantity of physical product for example CD’s and promotional materials.

I could release the album as a digital only download from my bandcamp page which is something I have done in the past and have not enjoyed. To me nothing beats being able to hold the physical product in your hand, flipping through the liner notes and enjoying the artwork up close and not via the medium of a glowing computer screen. The digital age is well and truly in full swing and a lot of people would prefer their music on their mp3 player, smart phone or laptop, which is fine and dandy and I will in the long run succumb to the present and make the album available in a digital format.

The reason I want to press physical copies of the album is mainly for the sense of personal achievement, I want to be able to hold my creation in my hands once it’s complete, frame it, put it in my CD collection in between favourite albums from years past and I want other people who feel the same way about their music to be able to do the same.

The question remains; How does this fit into Buy Nothing New?

The short answer  – It doesn’t.

The long answer – It doesn’t with a but.

I will have to purchase “new” things, but those things, if everything goes according to plan, will not occupy space in our home very long and will also be recouping the money initially spent on them with the potential for making a small profit and that my friends is the but.

So I will be releasing an album sometime this year and it technically will break the BNN mantra but only a smidge.

If you would like to hear some of my older music and keep up tp date with the making of this album check out the websites linked below.

What we said when…

Is anyone out there?